Another GenCon has come and gone as of last week.  This was my 11th year going, and it is just as fun as the first – especially now that we know some tricks.  This year, however, was a bit different in that it was more of a tour of the local eateries and breweries more than games.  We did get in our normal events, but one of my more memorable ones was hitting up 4 different local breweries.  We also added Giordano’s pizza to the list of places we must go for food.  Just dont be in a hurry.  Webber grill was as good always.  We did hit up St. Elmo’s for their world famous shrimp cocktail – and it did not disappoint.

Here are the photos from the week: GenCon 2016 Photo Album

Finally approved, I am heading on 2 different trips coming up in August and September.  In August (3-7) I will be heading up to Indianapolis, IN for the annual GenCon Indy event.  This will mark 11 years for a couple of us, and 10 of others.  It is 4.5 days of gamer heaven with events 24 hours a day starting Wednesday afternoon.  As we plan on being there around 1pm or so (depending on schedules) we will have an epic week.  Then, in September, dad and I are heading to Portland, Maine from the 3rd to the 10th.  Other than some great seafood and a trip down to Glouster, MA for whale watching, we will have plenty of time to see a lot of stuff in that area of the country, and I will be able to knock a few more of the remaining states off my list.  Gonna be some good times coming up!  Now, just have to get some things planned out for Portland.

This weekend I went up to a small lake in north eastern Indiana called Adams Lake just outside of Wolcottville, IN.  It is a place my family knows well, as my mom basically grew up there in the summers as a child.  For my sister and I, it is our 4th of July destination for as long as I can remember.  I haven’t been since 2007, so this is a big one for me, and I know a lot has changed.  My sister, her husband and 2 daughters and my dad and I are all going in the same van.  Yay for an iPad stacked with movies and good headphones.

END_OF_DOCUMENT_TOKEN_TO_BE_REPLACED 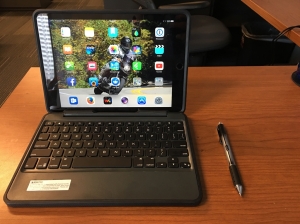 So I briefly took a look at the Zagg Rugged Book for iPad Air 2 last night and threw up some initial thoughts.  Now, I would like to actually give some real thoughts after using it a bit more for working on emails, Reddit posts and replies as well as more blog posts.  First of all, it is so nice having a full keyboard to use and still see the whole screen rather than being stuck with the on-screen keyboard.  This is like having a full laptop rather than a tablet.  It is not a full-sized keyboard, but that is not possible because of the size of the iPad in comparison to a full keyboard.  Even the Apple wireless keyboard, which is one of the smallest full-sized keyboards is wider than the iPad.  That’s ok, because it is so much better than being stuck with the on-screen keyboard.

END_OF_DOCUMENT_TOKEN_TO_BE_REPLACED

Well, this week I picked up a new Bluetooth keyboard and case from Zagg.  It is their Rugged Case.  Now, it is not a waterproof or dust proof case, however is it quite shock proof.  It has some nice features, as without the backlighting and with normal use, the battery should last over a year without needing to be recharged.  There are different ways to put the shell together, from normal keyboard usage to movie mode (where the keyboard is behind the iPad.  For normal iPad tablet use, the case can be tucked behind and folded up.

END_OF_DOCUMENT_TOKEN_TO_BE_REPLACED

I have now had the new laptop for a month, and have mostly adjusted back to the Windows mode of thinking.  My new video editing suite has served well, but I still need to get into it further and get more comfortable with it.  I have meant to, but it seems I just haven’t been able to get away long enough to spend the proper time.  Do I miss the primary machine being a Mac?  Sometimes.  With the Mini, I still get to use OSX quite a bit – it does run the media center.  For now, however, I am making my switch back to Windows and it hasnt been terrible.

END_OF_DOCUMENT_TOKEN_TO_BE_REPLACED

First, I realize I have not been on here in a while.  Lots has been going on, some fun and some not fun.  Now that things are mostly stable, time to expound on a few things.

First, the Ky Highlands Renaissance Fair is currently in full swing, with last weekend being the first of the 6 weekends.  I am there this year for the first 4 of them, with a possibility of being there to help close up shop on the last day.  I work at the Legacy Forge booth at the fair, where we sell swords, axes, hammers, knives and all other types of weaponry meant for stage combat and full use.

END_OF_DOCUMENT_TOKEN_TO_BE_REPLACED

Finally.  It is the only word that comes to mind.  Ordered at GenCon 2014, I was given the shipping date that was 6 weeks out.  I should have had the die at the end of September 2014 or beginning of October 2014.  In December of that year, I contacted them.  No reply.  I attempted to get ahold of them via FaceBook.  No reply, in fact, they deleted my posts.  No status update anywhere on the site or FB.  I continued to try contacting them, and when they did, it was always “they are being worked on, but the machines (enter broken term here)” however they were constantly showing all kinds of new materials they had for making dice out of on the “broken” machines.  So here I am, nearly 2 years later after spending a stupid amount of money on a single die.  Well, it came in the mail yesterday.

END_OF_DOCUMENT_TOKEN_TO_BE_REPLACED

Well, the laptop finally landed on Tuesday.  I didn’t get a whole lot of time with it, other than to start some of the installs of software I was going to need and want to have.  Still working out what editing suite to get that wont cost me an arm and leg…  However, one piece of software I use for remote desktop has caused some issues.  Splashtop Streamer does not work well with others on the PC.  I could not run any full-screen games.  Removed it and boom, everything works.  I also named it as well, rather than Laptop-SN.

Dullahan – Headless Horseman or Headless Rider, from old Irish lore.  The Dullahan is a headless rider, usually on a black horse who carries their own head under one arm. The head’s eyes are small, black, and constantly dart about like flies, while the mouth is constantly in a hideous grin that touches both sides of the head.  All the rest of my computers and tablets and phones have all been named after monsters, this felt fitting.

As there have been issues running my existing laptop (MacBook Pro 17″ 2011) with overheating and random turnoffs, I have opted to go ahead and get a new PC.  I spent $3600 on the MBP when I bought it, and it has lasted longer than any other PC I have ever owned.  So I cannot fault the computer or build quality.  It did everything I asked of it, for a long time.  5 years is a long time for any computer, much less a laptop.  It is time to upgrade, however.

END_OF_DOCUMENT_TOKEN_TO_BE_REPLACED

Kentucky Kickdown 2019September 13, 2019
Head down to Louisville's largest Vintage Motorcycle Show in KY at Turners on the river.

Helluva way to end the trip!
Was a day of World Cup (damnit U.S.A., close a drive!) drinks and pools. Hard to see in the photo, but the beach was standing room only. And of you get the chance, add a shot of raspberry vodka onto a mule. Cause damn.
Finishing up with an Stag’s Leap Artemis. Yum!